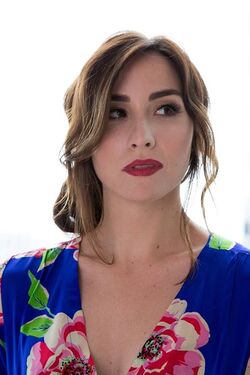 Allison Glenn Scagliotti born September 21, 1990 is an American actress. She is best known for her roles in Drake & Josh and Syfy television series, Warehouse 13 .

Allison Scagliotti is most recognizable for her role on Nickelodeon’s Drake & Josh as Josh’s smart and sassy girlfriend, Mindy. Scagliotti began her professional acting career at the age of 11 with the NBC pilot America’s Most Terrible Things starring Chevy Chase, which was followed by two more pilots and many memorable guest spots on ER, CSI, and One Tree Hill. She has since played daughter to the likes of Heather Locklear, Sigourney Weaver, Kate Walsh, J.K. Simmons, and Doug Jones. Her recent work includes the series Mental for Fox and the Starz original comedy series Party Down.

Scagliotti has had numerous small television roles during her career including One Tree Hill, and CSI as well as the Nickelodeon series Zoey 101. Scagliotti also had a recurring role on Drake & Josh, as Mindy Crenshaw, Josh's rival and later girlfriend. She appeared in seven episodes from 2004 to 2008. She reprised her role in the spin-off movie, Merry Christmas, Drake and Josh.

Her first lead role was as Maddie in the 2005 short film Redemption Maddie.

Scagliotti is best known for her portrayal of the character Claudia Donovan in the 2009 series, Warehouse 13 on Syfy. Her character was introduced early in the premiere season and she appeared in most of the remaining episodes (though credited as a guest star until season two). Her character crossed over to Eureka when she guest-starred in the season four episode "Crossing Over". She helped co-host SyFy's Ghost Hunters Live on Halloween 2010.

She appeared as Jayna, the female Wonder Twin, in Idol the 8th episode of the ninth season of Smallville.

She has appeared as a guest on the show Destination Truth and The Nerdist Podcast hosted by Chris Hardwick.

She has also appeared as a guest star on Geek & Sundry's TableTop, hosted by Wil Wheaton.

She appeared in the indie film Losers Take All, set in the 1980s rock music scene.

In 2014, Scagliotti joined the advisory board of Sci-Fest, the first annual Los Angeles Science Fiction One-Act Play Festival, held in May 2014.

She appears in Freeform's Stitchers as Camille, a main character. The show premiered on June 2, 2015, and was renewed for a second season.

Scagliotti has been in a band known as Nice Enough People since Fall of 2015.

She appeared as a guitar player in the music video for Maxie Dean - Some Are Girls.

Retrieved from "https://stitchers.fandom.com/wiki/Allison_Scagliotti?oldid=23362"
Community content is available under CC-BY-SA unless otherwise noted.