Start a Wiki
Camsten is the Current Relationship between Cameron Goodkin and Kirsten Clark. They are currently Best Friends and Dating. In The One That Got Away, Kirsten told Cameron that she needed time to process the emotions, but in The Two Deaths of Jamie B, she tells him that she doesn't want to make anything awkward as friends, essentially saying no to them dating. They started dating in Season 3 Episode Out of the Shadows.

Kirsten first meets Cameron when they were children in the hospital where Cameron had a heart surgery while Kristen's mom was admitted into the hospital because of a car accident. She is painting her mother's nails when Cameron walks in and tells him her dad has a plan to help her mom. Cameron comforts her when she becomes sad. This memory of their first encounter was lost when she was stitched into her mother's mind by her father, which resulted in Kirsten losing all her memories before the age of eight, and causing her to develop Temporal Dysplasia. Upon stitching into Cameron's mind while trying to find information on who was behind the shooting of Quincy Fisher, Kirsten discovers that all his memories were of the times that Cameron has spent with Kristen, including this first meeting. Kirsten meets Cameron again upon entering the Stitchers Program. They verbally spar with each other, with Kirsten remaining cold and dismissive. After exiting her first stitch, with the memory engrams of Peter Brandt's feelings toward Julie Malarek, Kirsten walks over to Cameron and kisses him.

Kirsten tells Cameron in the season finale " I don't even remember ever being home in the first place, ever. Except here, with you. Here feels like home. Hey, come here, come here." They hug and after a while they kiss for 26 seconds and then they stop and Kirsten says " I'm sorry. I'll go. I'm sorry. "

Out of the Shadows : At the beginning of the episode Cameron is leaning over the tank where Kristen remains trapped in her memory after three days. Just as the team are about to reboot the system in an attempt to try and bounce Kristen Camille says “Win or lose, you know they are going to disappear us”, Cameron replies “If Kristens dead I won’t care.” After rebooting the system, it causes Kristen to crash and Cameron says her name repeated with growing concern. He becomes relieved when her blood pressure increases. This causes him to become hopeful that it might have worked, but is disappointed when it doesn’t. Once they finally gets Kristen to bounce she goes directly too Cameron for comforting having believed that her mother said those things not aware that it was actually Cameron. Angry with Cameron she slaps him before fainting into his arms. Cameron holds her.

Later on the episode, Kristen works up a security clearance in an attempt to rescue her friends. While walking through the NSA facility, Cameron tries to apologies to her, saying that her mother wasn’t real with Kristen responding “She was to me.” After the whole team gets caught and separated, Kristen and Cameron are together in the same room. Cameron tells Kristen to keep stitching without him in order to save her mother, Kristen refuses to do it without him. Camerom repeats that she has to in order to save her mother while adding on that as long as he knows she is safe he will be ok. Proceeded to say that he would work his way back into the stitch because that is where Kristen will be. Also apologises to Kristen again for messing with her memory of her mother.

Towards the end of the episode, just before they stitch Cameron expresses concern that it might be too soon to stitch after being trapped in a stitch for 3 days and tells that at the first sign of trouble to bounce. Tells her that he almost lost her once and that he doesn’t want to do that again. Kristen responds with “your cute when you are worried about me”, Cameron then says “I must be cute all the time.”

At the very end of the episode Kristen shows up at Cameron's apartment, she asks to come in and he says she is always welcome. He proceeds to tell her that he and Nina broke and that he realised that he wasn’t in love with Nina. Kristen asks how long he would have for her while she was trapped and without hesitating he says forever. The to proceed to kiss and begin a romantic relationship.

For Love or Money :

The Gremlin and the Fixer :

Just the Two of Us : 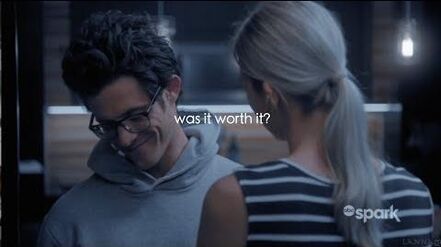 Cameron & Kirsten was it worth it? 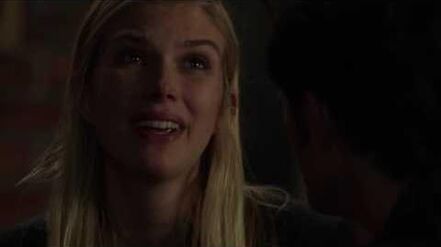 Retrieved from "https://stitchers.fandom.com/wiki/Camsten?oldid=24423"
Community content is available under CC-BY-SA unless otherwise noted.