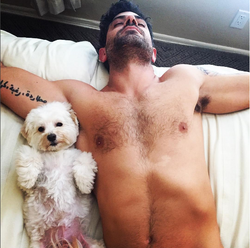 Damon Dayoub is an actor, best known for The Hog (2009), Dead End Falls (2009) and Love Naturally (2010). He plays Quincy Fisher on the Freeform series Stitchers. He was promoted from a recurring character to a main character for Season 2.

Damon Joseph Dayoub was born on July 14, 1980, in El Paso Texas, to Andrea Evers, a speech pathologist, and Richard Dayoub, the president of the El Paso Chamber of Commerce. Damon has an older sister named Danielle who is a personal trainer, and two younger half siblings Sam and Emily. Damon grew up in El Paso, and attended Coronado High School. Upon graduating in 1998, he moved to Austin, Texas, where he attended the University of Texas, and continued to live until moving to Los Angeles in January 2007. Damon landed his first TV guest star role on the show, The Whole Truth (2010), and has also appeared on shows such as, Brothers & Sisters (2011), Single Ladies (2012), Dallas (2013), NCIS (2013), The Last Ship (2015), and plays Detective Quincy Fisher on Freeform's Stitchers (2015—). On May 2, 2015, Damon married actress Emily Montague. They currently reside in Los Angeles.

Retrieved from "https://stitchers.fandom.com/wiki/Damon_Dayoub?oldid=23990"
Community content is available under CC-BY-SA unless otherwise noted.