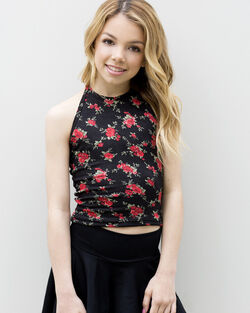 Kaylee Quinn (born July 18, 2004) is a dancer, actress and model. She is most notable for her dance career, as well as her role on Stitchers.

Kaylee Alyssa Quinn was born on July 18, 2004 to Jeannie Quinn. She has two younger sisters, Rihanna and Coco as well as an older brother, Tyler. The family resides in Los Angeles, California.

Quinn began dance classes at an early stage in her life. She formerly competed for Dance Precisions but now trains and competes at Just Plain Dancin', as well as studying ballet at the Dmitri Kulev Classical Ballet Academy. Quinn has achieved many titles during her dance career such as: Miss Junior Dance KAR 2014, 1st runner up Mini Female Best Dancer at The Dance Awards 2015 and the "Hope Award" at Youth America Grand Prix 2016.

Besides dance, Quinn models for the clothing line Pearl Yukiko and has a recurring role on Stitchers.

Retrieved from "https://stitchers.fandom.com/wiki/Kaylee_Quinn?oldid=24439"
Community content is available under CC-BY-SA unless otherwise noted.