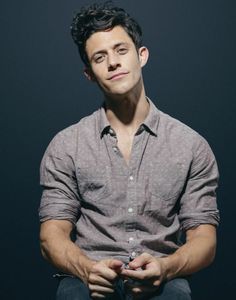 Kyle Harris is an actor, known for his roles in The Carrie Diaries and Beauty and the Beast on the CW network.  He currently stars in Freeform (formerly ABC Family')s Stitchers in the male lead role of Cameron Goodkin.

Harris got his start in theater, where he starred in the National Tour of West Side Story and on Broadway in James Lapine's Sondheim on Sondheim. Kyle Harris appeared in the national West Side Story tour in the role of Tony beginning September 30, 2010. He also appeared on The Carrie Diaries (The CW), for three episodes in the first season as Seth, college boyfriend of Mouse. Some other credits include the violinist, Christian, in The Little Dancer, a musical about the real life model for Degas' sculpture, Marie van Goethem, and Dr. Stone in the sci-fi short, The Electric Sleep. Outside of Stitchers, he is good friends with Grant Gustin who is well known for his current role on The CW as Barry Allen/The Flash. He has a brother named Cody and his horoscope is Taurus. (Source)

Retrieved from "https://stitchers.fandom.com/wiki/Kyle_Harris?oldid=24037"
Community content is available under CC-BY-SA unless otherwise noted.