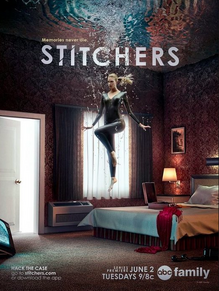 Stitchers is an American science fiction crime drama series created by Jeffrey Alan Schechter. The show was picked up to series on September 29, 2014, and premiered on June 2, 2015, on ABC Family. On July 14, 2015, the series was renewed for a second season to air on Freeform. The second season premiered Tuesday March 22, 2016 at 10/9 central on Freeform.

Stitchers follows Kirsten Clark, who has been recruited into a government agency to be "stitched" into the memories of people recently deceased to investigate murders and mysteries that otherwise would have gone unsolved. Cameron, a brilliant neuroscientist, assists Kirsten in the secret program headed by Maggie, a skilled covert operator. The program also includes Linus, a bioelectrical engineer and communications technician. Camille, Kirsten's roommate and a computer science grad student, is also recruited to assist Kirsten as a "stitcher". Added to the team is LAPD Detective Quincy Fisher who after crosses path with Kristen ends up recruited to the program.

Retrieved from "https://stitchers.fandom.com/wiki/Stitchers?oldid=24001"
Community content is available under CC-BY-SA unless otherwise noted.